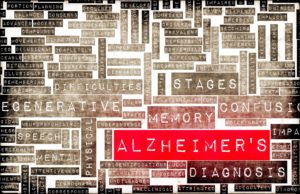 How do you track the early signs of Alzheimer’s?

5 Early Symptoms of Alzheimer’s and Dementia

Those experiencing early symptoms of Alzheimer’s and dementia may have trouble participating in conversations. Whether they are speaking or writing, individuals may find it difficult to come up with the right words and may call common items by a different name; they may also repeat themselves or stop speaking in the middle of a sentence or story and not know how to continue.

A common symptom of Alzheimer’s is losing items and leaving them in unusual places. When they cannot find their belongings, they may begin to accuse people of stealing and become untrusting.

One of the biggest problems in those with Alzheimer’s is their ability to make sound judgements and decisions. Many may begin to give large amounts of money to telemarketers or organizations and lose track of their accounts and budget. Personal grooming habits also fall by the wayside.

Though they may not know what is happening, the beginning stages of Alzheimer’s may cause people to withdraw from work or social events because of the changes they are feeling. People may have no interest in family time or hobbies, even though they used to love those activities.

The changes in mood and personality of a person experiencing dementia and Alzheimer’s may happen quickly and drastically. They may become suspicious, depressed, anxious and confused. Their comfort zone may shrink and can have extreme reactions with people they know and in places they are familiar with.

Though there is currently no cure for Alzheimer’s or dementia, getting a handle on the disease early can make the symptoms easier to handle manage. Watch out for these common signs to monitor the decline of you or someone you know. Start by tracking and monitoring memory with a free MemTrax test today!