Do you know the early signs of Alzheimer’s?

Alzheimer’s is a brain disease that slowly impacts the memory, thinking and reasoning skills of individuals overtime. If you’re not paying attention, this disease can sneak up on you. Be aware of these symptoms that you or someone you know may experience. 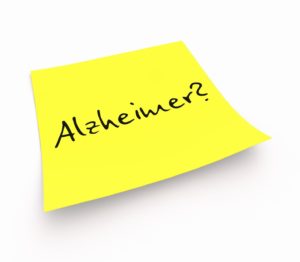 Memory loss is one of the most common signs of Alzheimer’s. Forgetting recently learned information is a typical symptom as is having to ask for the same information over and over again.

2. Challenges in Planning or Solving Problems

Daily tasks such as paying bills or cooking may become more problematic for those who are experience early signs of Alzheimer’s. Working with numbers, paying monthly bills or following a recipe may become a challenge and could take longer than it used to.

People with Alzheimer’s may experience problems with tasks and activities that they have been doing for years. They may forget how to get to a well-known place, how to budget or the rules to their favorite game.

4. Confusion with Time or Place

Those with the early stages of Alzheimer’s may have trouble with dates, time and periods of time throughout the day. They may also have difficulty if something is not happening this instant and may forget where they are and how they got there.

Some people may experience problems with reading, determining distances and differentiating colors and images.
Those with Alzheimer’s may experience one or more of these symptoms to greater degrees than others. Check back next time to go over five additional signs of early Alzheimer’s and don’t forget to take your free MemTrax test and track your scores as a method to check your memory skills.