TV and YouTube May Cause Dementia: The Science Behind Passive vs. Active Stimulation

We all know that watching too much TV or spending a lot of time on YouTube is bad for us. But what many of us don't realize is just how bad it can be. In fact, a growing body of research suggests that excessive passive screen time can lead to dementia and serious memory problems. Let's take a closer look at the science behind passive vs. active stimulation and see why it's so important to limit our exposure to screens. Can you break your addiction to the TV? See if TV is causing cognitive changes and memory loss over time with our MemTrax memory test and observe results along the continuum.

People who watch a lot of TV compared to others that use computers for a lot of the time are more likely to have brain health problems, memory loss, and dementia symptoms. We looked at whether this is also true to diagnose dementia. We found that people who watch a lot of TV are more likely to get neurological disorders like dementia, while people who use computers a lot are less likely. This was still true even if these people were physically active. So it's important to try and do more activities that are mentally active, like using the computer, instead of just sitting around and watching TV all the time.

Our brain changes at any given moment due to a phenomenon known as Neuroplasticity, our brains are like plastic and we wire them with our daily activities. Research has just revealed an incredible discovery that passive behaviors are actually what is causing dementia as opposed to active behaviors which prevent dementia. Researchers from Georgia Institute of Technology in Atlanta Georgia have published research on 150,000 older adults. Their medical history was analyzed and there was an incredible discovery that TV is causing dementia because it is a passive form of entertainment called: cognitively passive sedentary behaviors. However activities like computer games actually prevent dementia by activating neurons through a process called: cognitively active sedentary behaviors.

These finding supports our Neuroplasticity hypothesis for the cause of Alzheimer's disease, refuting the Amyloid plaques failed hypothesis, and how the lifestyles we choose have drastic impacts on how our brains develop over time. The research also explores how these impacts are unrelated to physical activity which might not be as large of a contributing factor as previous research demonstrates.

This discovery helps researchers explore new treatment interventions and preventative lifestyle changes that will help our brains last as long as our bodies. With our life expectancy on the rise it is critical that we make these finding and deploy the changes necessary in our society to ensure people can live longer happier lives and identify the risk factors for dementia.

Aside from excessive TV and YouTube watching, other causes of developing cognitive issues include lack of exercise, poor diet, smoking, and alcohol abuse. So make sure you get plenty of exercise, eat a healthy diet, quit smoking, and drink in moderation if you want to keep your mind healthy and sharp!

What Else Causes Dementia

The most common dementia diagnosis occurs when a nerve cells are damaged or lost and is connected within it's network of neurons and nerves. Nerve cell death effects people with dementia and harms the brain and nervous system. In some areas, dementia affects individuals in different ways and may cause different symptoms of dementia. Dementia affect usually are grouped primarily by common characteristics like the protein deposited into the brain parts affected by this. Some conditions, such as Alzheimer's or dementia, occur as a result of a response to medicine or vitamin deficiencies, but can improve with treatment. Other types of dementia are genetic, meaning they run in families.

There are many risk factors for dementia. Some of these include:

-Age: The older you are, the greater your risk of developing dementia. This is because as you age, your brain cells begin to die and your body produces less of the chemicals that protect your brain cells.

-Family history: If someone in your family has had dementia, you may be more likely to develop it yourself. This is especially true if more than one family member has had the condition.

-Exposure to toxins: Exposure to lead or other heavy metals can increase your risk of developing cognitive impairment.

-Head injuries: A traumatic brain injury can increase your risk of later

Aside from excessive TV and YouTube watching, other causes of dementia include lack of exercise, poor diet, smoking, and alcohol abuse. So make sure you get plenty of exercise, eat a healthy diet, quit smoking, and drink in moderation if you want to keep your mind healthy and sharp!

Aside from excessive TV and YouTube watching, poor diet is another major contributor to develop problems. In fact, one study found that a poor diet was a bigger contributor than smoking. Try to eat a healthy diet if you want to keep your mind healthy and sharp!

Smoking is yet another major contributor. In fact, one study found that smoking was a bigger contributor than lack of exercise! So make sure you quit smoking if you want to keep your brain healthy.

Research on alcohol abuse and cognitive decline has shown that heavy drinking can lead to a decline in mental skills. It's important to avoid excessive alcohol consumption.

TV and YouTube may cause different types of dementia if you watch them too much. This is because they are passive activities, which means your brain doesn't have to work as hard. But if you do active things instead, like play computer games, your brain will stay healthier. So it's important to find a good balance between being active and being passive. Too much of either can be bad for your brain!

TV is a Depressant

It is very sad that the first patent for the TV was a Central Nervous System Depressant. It is time to turn that TV OFF!

"A neurological effect of external electric fields has been mentioned by Wiener (1958), in a discussion of the bunching of brain waves through nonlinear interactions. The electric field was arranged to provide “a direct electrical driving of the brain”."

TV and YouTube have provided passive entertainment for a long time and generate enormous profit while turning viewers into couch potatoes and probably causing Alzheimer's disease and dementia. Addictions are incredible difficult to break because the daily repeat of an activity is eventually hard wired into the brain and causes dependence issues. So if you are addicted to the TV its time to turn it off and find a new active hobby! This discussion deserves a deeper dive into Megnetotherapy.

Alzheimer's and related dementias usually have severe decline in cognitive performance look out for signs and symptoms. People with dementia show different dementia signs as the dementia progresses. Rapid changes in cognition are not a normal part of life, people must recognize early onset Alzheimer's disease and implement early diagnosis based on early symptoms.

Our MemTrax test measures the type of memory most commonly associated with Alzheimer's and related dementias. Measure and watch for changes in short-term episodic memory, early detection is critical in the chain of cognitive care.

There are many different ways to detect problems early. One way is by recognizing the signs and symptoms of the disease. Another way to detect early is by getting regular check-ups from a doctor. They can run various tests to see if you have Alzheimer's or another type of neurological problem. If you're at high risk or notice symptoms, your doctor may recommend more frequent check-ups.

Cognitively active activities like reading, playing an instrument, or even doing a puzzle can help keep your brain healthy and prevent cognitive impairment. So make sure to incorporate some brain-boosting activities into your daily routine! And limit your screen time to no more than two hours per day to give your brain a break.

Now that we know just how bad TV and YouTube can be for our brains, it's important to find ways to counteract the negative effects of passive stimulation. One way to do this is through active cognitive stimulation and being on the lookout for symptoms. This can be done in a number of ways, including:

1. Playing games on a computer or smartphone

By engaging in these activities can help keep our brains stay active and healthy so lets stop memory loss. So turn off the TV, and try anything else instead! Your brain will thank you for it. While we still explore the root causes of dementia I want to thank you for supporting MemTrax as we aim to help discover the cure for Alzheimer's disease and other cognitive problems.

Do you have any tips for breaking your screen addiction? Share them in the comments below! 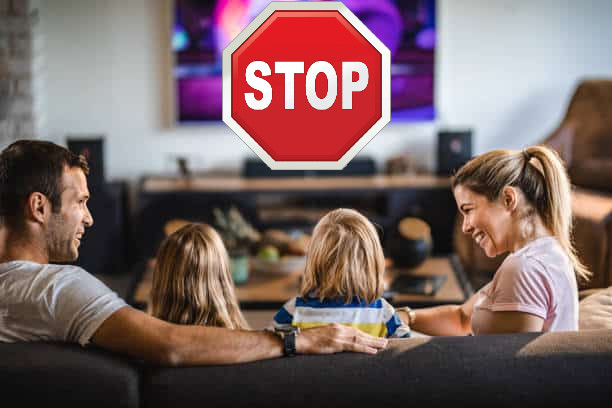